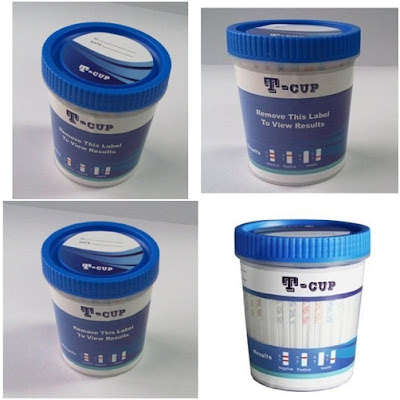 We are pleased to announce a new level of fully integrated, one step urine drugs screening test cup.

Urine test cup drug tests has been the most popular method of drug testing, and now we start to sell the most complete drug screening cup on the market, that testing for 10 drugs groups.

One Step Multi-Drug Urine Test is a rapid, qualitative, competitive immunoassay for the determination of Drug-of-Abuse (DOA) and/or their metabolites in human urine.

The device allows the detection of multiple drugs in one simple step. The Advanced Quality One Step Multi-Drug Screen Test is intended to be used in Professional Medical & Forensic laboratories.

A One-Step Multi-Drug Urine screening test for 10 types of drugs and in combinations of 3-in-1, 5-in-1 and 10-in-1 tests. It is a unique device that allows a simultaneous detection of multiple abused drugs with single sampling procedure and clear interpretation of results. It can be custom designed for different abused drugs.

This package insert applies to all combinations of multi-drug tests panel with integrated cup.

This Super Multi-Drug Urine Test Kit is an easy and accurate test that can be conducted at home. This Kit must be dipped in urine and removed. After 5-8 minutes, results are displayed in each of 10 Results Windows.

IMD One Step Multi-Drug Urine Test T-Cup is a competitive immunoassay that is used to screen for the presence of drugs of abuse in urine. It is chromatographic absorbent device in which drugs or drug metabolites in a sample competitively combined to a limited number of antibody-dye conjugate binding sites.

When the absorbent end of the test device is immersed into the urine sample, the urine is absorbed into the device by capillary action, mixes with the antibody-dye conjugate, and flows across the pre-coated membrane.

When sample drug levels are zero or below the target cutoff (the detection sensitivity of the test), antibody-dye conjugate binds to the drug-protein pre-coated in the test region (T) of the device. This produces a colored test line that, regardless of its intensity, indicates a negative result.

To serve as a procedure control, a colored line will appear on the control region (C), if the test has been performed properly.

• Wash your hands with soap and warm water. Open the sealed pouch and remove the urine test T-cup.
• The donors collect their urine samples. Open the cap of the cup and urinate directly into the test cup. The sample volume should be higher than the minimum urine level. Re-cap the cup.

Test must be in room temperature (10ºC to 30ºC).
1. After the urine has been collected, re-cap the cup and place the test T-cup on a flat surface.
2. Peel the label from right to left and read the result within 5 minutes. Do not read results after 10 minutes

Positive (+VE)
A rose-pink band is visible in each control region. No color band appears in the appropriate test region. It indicates a positive result for the corresponding drug of that specific test zone.

Negative (-VE)
A rose-pink band is visible in each control region and the appropriate test region. It indicates that the concentration of the corresponding drug of that specific test zone is zero or below the detection limit of the test.

Note: There is no meaning attributed to line color intensity or width

Material provided :
• One pouch containing a test T-cup and a desiccant
• Package insert

IMD One Step Multi-Drug Urine Test T-Cup 10 in 1 offers any combination from 2 to 16 drugs of abuse tests for 16 different drugs :

WHO SHOULD HAVE THIS PRODUCT?

A simple monitoring method at home. Self determine your children without authority / professional drug tester.

Parents are using home drug test kits to test their children and teenagers. Even if they’re the testee, it’s a pain, it’s stressful and it can be degrading and that’s if they DON’T have something to hide. If they do, the stress can be unbearable.

It is Easy, Quick & Accurate drug test that lets you know if your children (who is being tested) is using any of the drugs that are illegal like Cocaine or Crack, THC or Marijuana, Methamphetamine or Ecstasy, Opiates or Morphine and Amphetamines. Which is fall under the most popular Drug-Of Abuse within teenagers.

Employers are using them to test employees and potential employees, as is their right. Drug screening against an employee or a pre-recruitment. Employers can track their own employees whose involved with drugs.
In addition, employers can also make the initial screening before hiring someone to work with their company. This can prevent the company suffered losses from hiring workers who are involved with drugs. It also can protect the good name of company.

Screening for drug testing can be done through the problem & suspected students which is involved with drugs of abuse. Drug screening test can be done by the school authorities without any authority or professional involved.
Our Products :

Multi-Drug Test Cup 10 in 1 With Lock And Adulterants * Please enter izam@epicentroresources.com as Recipient Email for online banking transaction (Maybank2u / CiMB Clicks / etc)
Please notify us via email or SMS after payment have been made together with proof of payment :

* Please make payment within 48 hours after receiving Email / SMS Official confirmation from us.
* Managing the purchase will be automatically canceled if no payment is made within that period.
* We will review all records of payments, if valid and accepted, the shipment will be done.
* All sales and purchases subject to our terms & conditions